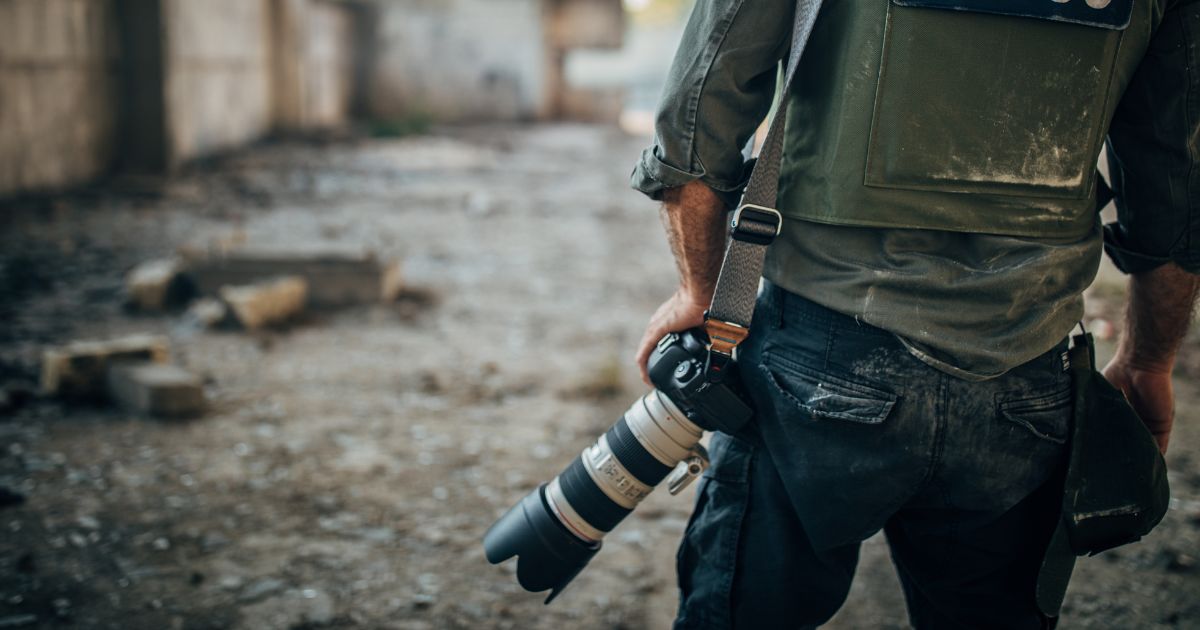 In a context of deep fakes and misinformation, one of the many challenges that journalists face when uncovering and reporting international atrocity crimes is capturing photographic proof in a way that both the public and courts of law will trust their authenticity. Another is how to deliver any potential evidence to accountability mechanisms. These challenges are particularly burdensome for citizen and independent journalists who do not have the resources or access that major news outlets often do .

eyeWitness supports many journalists around the world to report international atrocity crimes in both the media and to accountability mechanisms.

Photos captured with standard phone camera apps and specialist SLR cameras are difficult to verify, particularly for courts of law. As a result, many images of atrocities either cannot be used as evidence or are dependent on the photographer testifying in court.

This is why many citizen and independent journalists around the world utilise the eyeWitness to Atrocities camera app for Android phones. Free to download from GooglePlay, all images captured with the app are embedded with the location, date, and time they were captured, and can be easily verified for both advocacy and journalistic reporting.

Journalists who prefer SLR cameras can use the app to corroborate their professional shots. By capturing a photo with their SLR and then taking the same image with the eyeWitness to Atrocities app, the location, date, and time information captured by the app can corroborate when and where the SLR photo was taken.

Capturing photos and videos of atrocities is an inherently risky and life-threatening pursuit. Between 2006 and 2020, more than 1,200 journalsitsreportedly were killed globally. Many more are subject to threats. While no technology can eliminate those risks, the eyeWitness to Atrocities app has numerous security features that are vital to journalists reporting in high-risk contexts including a hidden password-protected gallery, app icon disguise, encryption, and emergency uninstall.

One of the questions many citizen and independent journalists have is how to deliver evidence to accountability mechanisms.

eyeWitness is a three-step verification and accountability process. First, documenters capture photos and videos with the app. Second, they upload the footage to the secure eyeWitness server where they cannot be tampered with. Third, eyeWitness analyses, catalogues, tags, and indexes the footage ready for investigators, and then seeks avenues for accountability. It should be noted that users can include an email address so that eyeWitness can contact them directly about using their footage for justice. However, this is strictly voluntary as many users in high-risk areas prefer to use eyeWitness anonymously.

As a result of eyeWitness’ three-step process, footage captured with the app has contributed to major accountability milestones, including the conviction of two warlords in Democratic Republic of the Congo.

Although many use the eyeWitness to Atrocities app independently, many prefer to work in partnership with eyeWitness to access additional legal expertise and documentation training. Importantly for journalists, partnership agreements can also include an embargo on footage. This will ensure that eyeWitness will not submit the footage to accountability mechanisms until a certain date set by the partner.

Numerous independent and citizen journalists partner with eyeWitness so they can simultaneously break major stories and contribute to international justice. For example, Nigerian journalist Hassan John reports violent attacks on villages across the Middle Belt region of Nigeria. In addition to using his footage for his advocacy and journalistic work, Hassan has collaborated with both eyeWitness and other eyeWitness partners in Nigeria to submit an urgent appeal to the United Nations.

Photojournalist, Anastasia Taylor-Lind, helped collect vital evidence of attacks on civilian housing in Ukraine with the eyeWitness to Atrocities app whilst reporting the stories of civilian life in wartime. Anastasia’s professional photos from the mission appeared in TIME magazine in 2018, and her eyeWitness footage was later used as evidence in a submission to the United Nations in 2020.