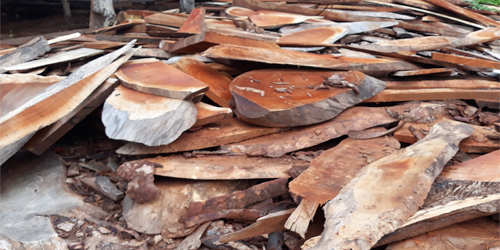 Combining eyeWitness trusted geolocation metadata with satellite imagery, lawyers at TRIAL International were able to uncover that a precious type of timber had been logged in Casamance, a region south of The Gambia undergoing an armed conflict.

Between June 2014 and March 2017, Westwood, a Gambian company that TRIAL International alleges was owned by a Swiss businessman and former President Yayah Jammeh, exported over 315,000 tons of rosewood. In June 2019, TRIAL International filed a criminal complaint before the Swiss War Crimes Unit against the Swiss individual for the alleged pillaging of protected, Senegalese rosewood.  According to the complaint, the timber was illegally harvested from the neighboring Casamance, where the Senegalese army has been fighting the Mouvement des Forces Démocratiques de Casamance (MFDC) since the 1980s. With Jammeh as an ally, the MFDC was able to monopolize the timber trade in Lower Casamance, using its profits to finance the armed conflict.

To support the complaint, TRIAL lawyers took photographs with the eyeWitness app in areas where the rosewood was felled. Using the embedded GPS coordinates provided by the app, the legal team (with the assistance of Transparent World) conducted an historical analysis of the satellite imagery of those locations. This powerful combination of technology allowed TRIAL to demonstrate that areas where rosewood was present had been subjected to selective logging over the relevant time period. eyeWitness also provided detailed information for the Swiss prosecutor explaining the code of our software and the transmission and handling protocols that maintain the chain of custody of the images. This information helps facilitate the authentication and verification of the photographs.

This is the first case where illicit timber traders are accused of pillaging conflict resources in Switzerland. If this case succeeds, it would be the first case anywhere to convict someone for the pillaging of any natural resource. It is also a groundbreaking case as it seeks to use the existing international criminal legal framework to punish environmental crimes, a subset of crimes that go mostly unpunished.